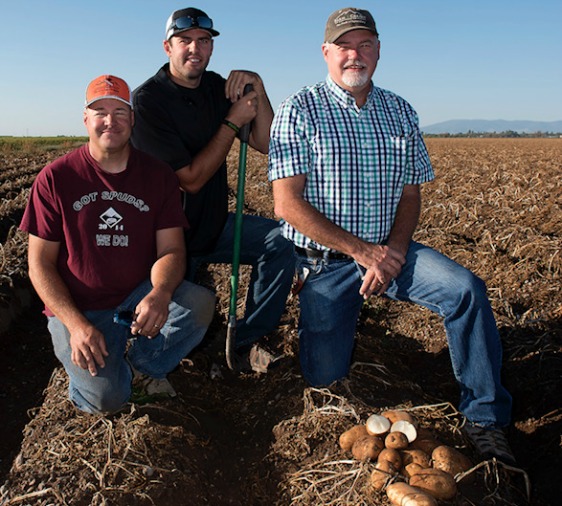 Today the farm is Co-managed by both Kent and Duane. They have continued to expand the farm and purchased another new circle in 2014. Recently Kent’s youngest son, Andrew, joined in on the farming operations. The farm has been selling certified seed for over a decade and has become very proficient in the production and sell of the young generation potato.

The production and quality of the certified seed, and the satisfaction of their business partners, is an area where both Price's take extreme pride.

Both of the Price's take extreme joy in their families. Kent and his wife Lorena have been married for 28 years and have 4 children. Scott(28) is currently attending Creighton law school in Omaha Nebraska. Chad(26) has recently returned to the San Luis Valley and is working at the Monte Vista CO-OP. Andrew(24) just got married and returned to the farm. Hannah(21) currently attends college at Grand Canyon University in Arizona.

Duane's and his wife Mary have 6 kids; Chelsea(16), Justin(14), Aiden(11), Aaron(8), and their twin boys Jacob and Corwyn(5). All of their children are currently attending school.

Price Farms was started By James Truman Price in 1966. Truman started out his farming career in Texas during the year 1955. In 1965 he discovered 280 acres of farm land for sale in Colorado which he purchased. He moved to the San Luis Valley in 1966 to start Price Farms. When he arrived in Colorado he was the only employee he could afford and his available equipment was: 1 tractor, 1 harvester, 1 piler, 1 truck, and 2 old planters.

In 1972 Truman was able to buy a new 4 row planter that allowed him to greatly improve his production. Due to the successful year he was able to expand the farm by purchasing his own storage space and new plots of land.

In 1973 Truman started Price Farms first certified seed program. The Program was only able to last until 1976 due to the fact that Truman did not have the proper storage facilities to produce the quality of seed that he desired.

In 1987 Truman's Oldest son Kent took an active role in the operation of the farms daily activities. Kent was a graduate from Adams State with a major in Industrial Arts.

In 1993 Duane, Truman's other son, began assisting his father and brother in running the farm. He was also a graduate from Adams State College with a degree in business.

Following the additions of both Kent and Duane, Price Farms began to take a drastic turn towards the positive. Several new plots of land were purchased, New and improved equipment was acquired, tactics and science began to greatly improve the quality of the crops, and Storage facilities were greatly improved and their numbers increased.

In the year 2000 Truman, Kent and Duane made the decision to restart the certified seed program within the farm. They reached this conclusion based on the facts that their storage facilities, new equipment, and ability to properly produce a quality product, had greatly improved since the attempt in 1973. In the year 2008 Truman retired. When Truman left, the farm it consisted of 2,240 acres of land had, 6 tractors, 8 trucks, several other equipment for seed, planting, and harvesting.

The San Luis Valley has been a large potato producing economy for many years now. They first started growing potatoes in the 1880’s and have continued to produce today. They have become one of the largest production areas producing over 50,000 acres of potatoes. A large portion of these acres are used to produce certified seed. The San Luis Valley provides the majority of Colorado with seed potatoes. The Valley has been extremely vital in the growth of the potato industry and will continue to do so.